CIRCLE JERKS GET SKANK-HAPPY IN HOLLYWOOD 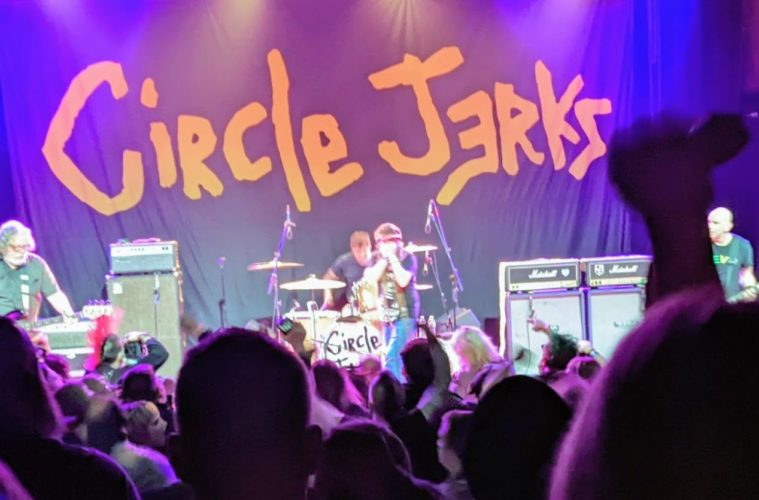 Circle Jerks get Skank-Happy in Hollywood: There was a good reason we wanted to put Keith Morris and his Circle Jerks on the cover of LA Weekly recently: as far as we are concerned, Morris is the king of Los Angeles hardcore. Rollins isn’t from here and, in any case, it was Morris who co-founded Black Flag. He made a huge impact there and then, when he left that band, he did it all again with the Circle Jerks. He’s been revisiting his Black Flag past with other former members in Flag. But still, this most recent Circle Jerks reunion, and this hometown show in particular, feels like a massive event. Thanks Christ they’re back.

Before that, Detroit hardcore veterans Negative Approach get the ball rolling at 7:20 p.m. People are still rolling in, but the crowd gathered for NA, and the circle pit that develops, is impressive. There are few hardcore frontmen more naturally intimidating that John Brannon, a man who sounds like he’s gargling broken glass. His stare burns through lead, as he prowls the stage. Honestly, we would have liked to have seen them further up the bill but we doubt the NA guys give a shit. Songs such as “Tied Down” and “Ready to Fight,” plus covers of the Stooges’ “I Got a Right” and Sham 69’s “Borstal Breakout” are the perfect appetizer.

Next up, New Jersey’s Bouncing Souls are far less aggressive and full-on than NA, but they have a ton of killer tunes in their arsenal and they fire them off one after thew other, starting with the hyper-sweet “Hopeless Romantic.” “Here We Go” offers a soccer crowd sing-along vibe, while “True Believers” is a proper anthem. The contrast between the first two bands was stark, and welcome.

7 Seconds are very popular with the CJ’s crowd, but they were undeniably lacking the energy of the other bands on the bill, or indeed of their records. It’s tough to put your finger in the issue, but the set just dragged until an admittedly super-fun cover of “99 Red Balloons” at the end. We were in the minority — the crown lapped up their melodic hardcore anthems so make of that what you will.

But still, this night was all about the returning Circle Jerks and they were on it from the opening “Deny Everything.” Morris was in chatty form too, telling us that the band members are getting up there in age now, so they have to perform their frenetic hardcore anthems in blocks.

Fair enough because, besides those occasional water breaks, you wouldn’t know that they were in their vintage years based on the performances. Tunes such as “Beverly Hills,” “Stars and Stripes” and “Moral Majority” sound as topical and relevant now as they did when they were recorded, and the band didn’t allow the energy to dip.

Morris addressed the fact that relationships were strained within the band for many years, essentially placing the blame on his own shoulders by saying, “I talk too much.” But no matter, because Morris, Greg Hetson and Zander Schloss, plus “new boy” drummer Joey Castillo, sounded superb together on the big Palladium stage.

“Beat Me Senseless,” “World Up My Ass” and a monstrous “Wasted” arrived toward the end of the set, before encores “I Wanna Destroy You” (originally by the Soft Boys), “What’s Your Problem” and “Question Authority.”

All of which confirmed what we said at the start: Keith Morris is the king of L.A. hardcore, and the Circle Jerks is his perfect vehicle. So it remains.

SUPERGRASS ARE FEELING ALRIGHT AT THE WILTERN