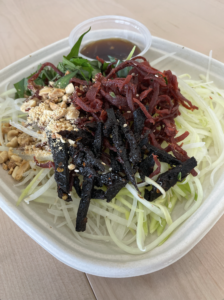 The small but mighty 250-square-foot Sesame LA market in Chinatown’s Central Plaza celebrates its first anniversary this month, and as part of that celebration, owner Linda Sivrican has opened the Sesame Dinette in Long Beach to showcase the culinary talents of her mother, Judy.

Located in the former Retro Saigon Bistro, it’s a three-generation family affair that also includes her stepfather David Nguyen and daughter Kiera Sivrican in the kitchen. The dinette serves as a platform to feature a rising new wave of young Asian chefs and culinary collaborators as part of Sivrican’s rotating residency program.

It’s designed to be an incubator for the Asian Americans and Pacific Islanders culinary community, highlighting generational Pan-Asian cooking in a playful and cozy dining space set off by artwork and handmade furniture by local LA artists and artisans. Similar to Sesame LA, the dinette also carries carefully curated products that highlight predominantly Asian vendors. The bright white walls are adorned with colorful pandemic-inspired works from her favorite artist, Jesse K. Phillips. “My mom found this space,” Sivrican, who also owns a parfumerie in Chinatown, tells L.A. Weekly, from behind the counter of the dinette. “She fell in love with the size of the kitchen. She’s been a professional chef and caterer for decades working in tiny kitchens. This is my first restaurant venture, and we’re taking it easy and slow to start,   the hours and menu are limited. My parents are taking care of the lunch menu from 11 a.m. to 3 p.m. For the 8 a.m., and all day menu, I’m using this space as a platform for rotating residencies. We have younger talent coming in and doing things like a coffee program, pastry program, so you have a multigenerational point of view.”

The 73-year-old Judy Nguyen, who previously worked at District, is the force behind the seasonal menu, working side by side with 76-year-old husband David and 19-year-old granddaughter Kiera, who spent time in front of the house at Destroyer. Her 30 years of restaurant and catering experience are the inspiration behind items like salmon belly, and dill and turmeric fish spring rolls. The vegan version is a unique blend of textures that includes jicama, fried wonton wrappers, tempeh and peppery nasturtium leaves.  The exquisite green papaya and beef jerky salad is a fresh take on the traditional goi du du bo kho with mango, fresh herbs and peanuts in a chili soy sauce vinaigrette that’s good enough to drink on its own as a cocktail. The chicken, pork and vegetarian bahn mi sandwiches don’t come on the typical baguette – the dinette uses barbari bread, an Iranian bread that is flat and crispy, and not too bready.

“We’re trying to keep it fun here,” says Sivrican. “We’ve only been open about a month and it doesn’t really feel like a full-scale restaurant. But once we start with the delivery apps and bigger catering jobs, that big kitchen back there is going to feel the heat. My mom’s got hundreds of recipes that she wants to share.” The small pantry also carries many of the same staples as Sesame LA, including Black Sesame Crunchy Butter from Alhambra-based Rooted Fare and the delicate artisan Japanese Black Sesame Chocolate from Deux Cranes. There also are brands that have Asian flavors that don’t have AAPI owners as well, like a Mexican chef who makes Japanese chili oil and a European company that makes Asian flavored crisps.

The Upland native has been an entrepreneur since her early 20s and works together with husband Mike Sivrican in their Capsule Parfumerie in Chinatown, with a strong desire to encourage other Asian entrepreneurs to be brave and take chances.

“I grew up in a predominantly white community, so I always sort of felt like an outsider, and at the same time felt like an outsider in my own Asian community,” she says. “I’m sort of caught in the middle, trying to find my foothold. But I’ve never looked at Asian as being a challenge. It didn’t stop me from doing anything that I’ve done so far. At the same time, it’s heartbreaking to see what’s happening in the Asian community. I’ve encountered racism growing up and we got used to it, but I’ve never seen it to the extent of violence. It makes me want to stand up even taller and be even louder. “