FANTASTIC BEASTS: THE SECRETS OF DUMBLEDORE— MORE MESS THAN MAGIC 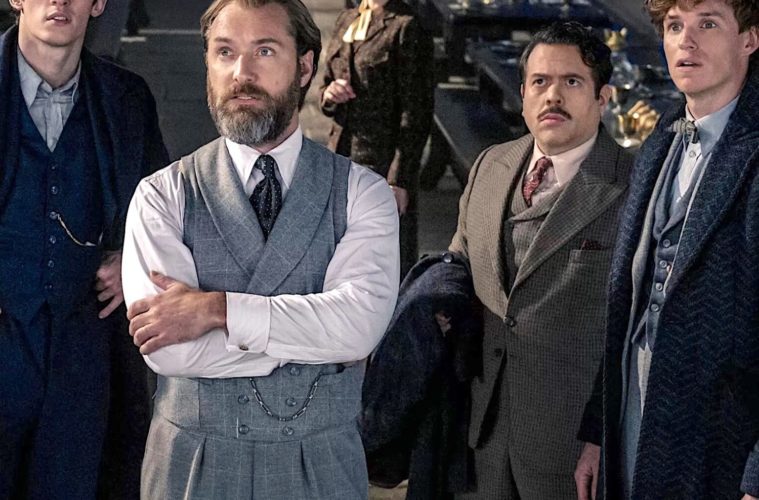 Fantastic Beasts: The Secrets of Dumbledore is the third installment from the Harry Potter off-shoot based on a Magizoology textbook that at this point, has very little to do with either fantastic beasts or where to find them. For the most part, the series is a bit of a disjointed mess laden with small Potterverse morsels meant to feed the fandom. But it really only teases the palate. Though the newest film attempts to right some of the previous wrongs by harkening back to the franchise’s origins, there isn’t enough lore to keep the story coherent.

Written by J.K. Rowling and Steve Kloves and directed by David Yates, The Secrets of Dumbledore picks up where the second installment left off: with the revelation that Obscurial Credence Barebone (Ezra Miller) is actually Aurelius Dumbledore, a long-lost Dumbledore who was somehow betrayed by his birth family. The truth is a bit more complicated, as both Albus (Jude Law) and his brother Aberforth (Richard Coyle) have their fair share of dark secrets.

The real crux of the movie centers on Gellert Grindelwald, a role that is as cursed as the Defense Against the Dark Arts position at Hogwarts, as it’s been cast for a third –and hopefully– final time. Now played by Mads Mikkelsen, Grindelwald seems set on destroying the Muggle world for… reasons. His blind hatred and distaste for non-magical folks is evident, but unclear. What is clear is that he needs to be stopped. Also for… reasons. Though Mikkelsen is obviously not the first actor in the Grindelwald role, he is the best suited. His menacing demeanor is more nuanced than Johnny Depp’s previous attempts, which were exorbitant at best.

Sadly, the most powerful man in the magical world and the only one capable of deterring Grindelwald, Professor Albus Dumbledore (Law), is not up for the task. He is held back by the bonds of a blood pact made when he and Grindelwald were young. And so, they must have others do their dirty work, relying on ineffective strategies carried out by questionable people.

In this installment, Newt Scamander (Eddie Redmayne), his story and his love life take a backseat, as his sweetheart Tina is completely set aside in lieu of hula-dancing scorpions and trips to Hogwarts. Newt becoming a secondary character in his own story and the removal of one of the franchise’s main characters is just one of the film’s many faults.

The story structure is a bit of a mess, filled with plot holes, continuity gaps, and logistical issues. Small problems, such as timeline questions between story setting and the age of Professor Minerva McGonagall (Fiona Glascott) already had the fanbase reeling. But this might be the least of the film’s problems and unanswered questions.

For example, half the film deals with a turbulent election campaign, but later, the selection of a candidate is made by a rare, magical creature. Why is there a correctional system that involves murderous, dancing scorpions? Why are they trained to kill visitors? And what is Queenie’s (Alison Sudol) reasoning for joining Grindelwald? Certainly as someone with a natural talent for “Legilimency” (the practise of using magic to enter another person’s mind), she can see that he does not have her best interests at heart? Also, for a secret society, why do they use fireworks at every turn? Won’t Muggles see that? The film just seems to be a collection of set pieces with a loose story to tie it all together.

On a more positive note, Dumbledore does finally give fans what they want: more Harry Potter. With trips back to Hogwarts, visits to the Room of Requirement, and fragments of John Williams’ iconic score, a starved fandom is finally fed as the film dips both into the books and the movies for its lore. The movie shines in its ability to expand the world beyond the corridors of Hogwarts, too. Whereas Harry Potter stayed mostly within the hallowed hallways of the great school with occasional visits to the Burrow or Hogsmead, this tale has the world as its playground. The scale of which Fantastic Beasts is able to construct its story is ambitious, and it helps build upon the Wizarding World.

Fantastic Beasts: The Secrets of Dumbledore is a spectacle, but it isn’t a very well told story. It’s the result of not taking the time to carefully construct a narrative that’s both respectful of the fanbase or its origins. Though it is filled with fully-realized characters who are brought to life by capable actors, the shabby writing and careless world building is a bigger threat to the Wizarding World than any dark force. How Warner Bros. will even attempt to squeeze out two more films from this empty husk of a franchise is going to be a fantastic magic trick all its own.