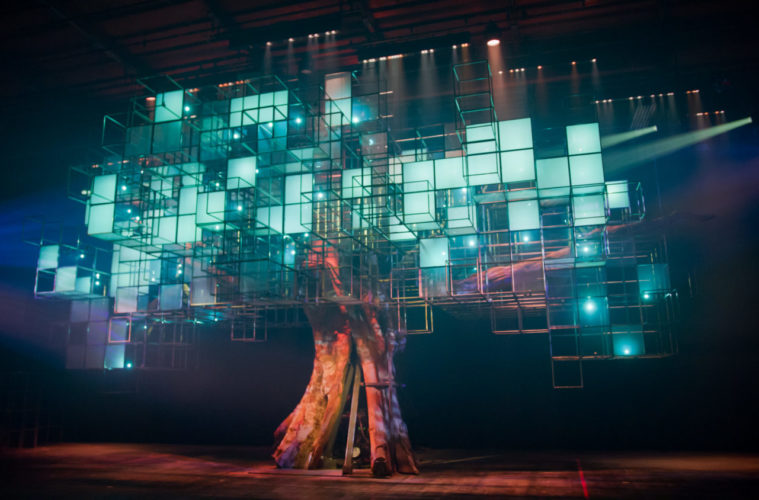 “The best time to plant a tree,” so the saying goes, “was 20 years ago. The second best time is now.” But in artist Glenn Kaino’s newest experiential installation, A Forest for the Trees, an eclectic dream team of interdisciplinary creatives is thinking about America’s woodlands not in terms of decades, but in centuries, even millennia. And while they’re reimagining humanity’s relationship with nature, they’re also revamping the broader potential for so-called immersive art installations to create something meditative, thought-provoking, educational, healing, and even spiritual. As viewers enter upon the theatrically staged walk in the woods, they are transported by music, lights, sculptural illusions, robotics, stirring emotion, and storytelling; but first, they get a quick lesson in indigenous forestry from Jesse Williams. Glenn Kaino: A Forest for the Trees (Photo by Charley Gallay/Getty Images)

Kaino’s team was inspired by The Atlantic’s 2021 editorial series “Who Owns America’s Wilderness?” The historic magazine co-founded by naturalist poet Ralph Waldo Emerson is a producer on the Los Angeles installation, along with Lakota producer Laundi Keepseagle (Standing Rock reservation). It’s against this inspiring and problematic backdrop that the project proceeds, having set a tone for a decolonized vision of the future of our forests — one grounded in the science of the future and the wisdom of the past. “In truth, the North American continent has not been a wilderness for at least 15,000 years,” writes David Treuer in his Atlantic piece, Return the National Parks to the Tribes. “Many of the landscapes that became national parks had been shaped by Native peoples for millennia. The idea of a virgin American wilderness — an Eden untouched by humans and devoid of sin — is an illusion.” Glenn Kaino: A Forest for the Trees (Photo by Stefanie Keenan/Getty Images)

The antechamber to the enchanted forest features a light-based illuminated mini-lecture on this topic, narrated by Williams and accompanied by a suite of backlit scenes in an energetic woodblock cut style by Ukrainian artist Kirill Yeretsky, illustrating the knowledge being imparted. The story of how in the Karuk Tribe Jump Dance ceremony a man leaps off a rock at the base of the river and the ripples call the salmon back upstream, the sound signals the start of a controlled forest fire — an essential element in Native forest stewardship. But in 1911, even as the Weeks Act established the National Forests program, it also banned all Native burning ceremonies — with predictably disastrous results for everyone involved, whose effects are being felt more than ever now amid a global climate crisis and a run of catastrophic “fire seasons” here in California. Once you have absorbed this context, it’s off into the woods. Glenn Kaino: A Forest for the Trees – Well  (Photo by Aaron Mendez)

A well-worn boardwalk like you might see along any nature trail leads you by a colonnade of tree trunks in earthy grounds, along a series of four vignettes honoring the elemental magic of water, wood, earth, and fire. A well of glass and light appears to recede down to the center of the world in an unending swirl of clear water, with the poetic sounds of Priscilla Ahn in one of the show’s original compositions by Kaino and Sitek’s art and music collective High Seas. A Great Basin Bristlecone Pine is immortalized in a monumental speaking sculpture inspired by Methuselah — at 4,800 years, the oldest known living tree — voiced by magician and mentalist Max Maven. This eternal arboreal king twists and rises, and is scarred by time; it’s impossible not to experience physical resonance with its majesty and trauma. It’s surrounded by a cohort of Animatronic HCI (Human Tree Interfaces) which impart stories of the forest voiced by Breanne Luger, native comedian; Joel McHale, actor and comedian; Ron Finley, activist and gardener; Robert Super, native comedian and Kanuk Tribe elder; and Rodney Mullen, engineer and skateboarding pioneer. Glenn Kaino: A Forest for the Trees (Photo by Charley Gallay/Getty Images)

A collection of vintage Smokey the Bear posters leads up to an interactive, illusionistic fire pit that responds to the hand movements of emboldened audience members, referencing the ritualistic, intimate power of Native controlled burns, accompanied by haunting vocals from Alice Smith, and a wizened portrait of Karuk Tribe consultant Bill Tripp by Shizu Saldamando. At the vast space’s far-end denouement, a wide seating area on benches made from reclaimed local trees faces Resurrection, a towering and wide architectural armature of glass and steel encasing the considerable remains of the famous Olvera Street fig tree. The 144-year-old Moreton Bay collapsed in 2019, but springs to life in this hybrid suit activated by a trippy yet meditative light and music show, with swelling, angelic vocals by Kitty Harloe and a complex illumination choreography of its hundreds of glass-panel cubes. Glenn Kaino: A Forest for the Trees  – Resurrection (Photo by Aaron Mendez)

A Forest for the Trees draws heavily from Kaino’s ongoing research as the co-curator of the Hammer Museum’s exhibition Breath(e): Towards Climate and Social Justice, part of the Getty Foundation’s Pacific Standard Time 2024, which is devoted to the intersection of art and science; and yes, there will be an app. The current iteration also hosts a culinary component by chef Minh Phan of porridge + puffs and PHENAKITE, and a Memory and Memorabilia shop in the entrance/exit lobby conceived and curated in collaboration with Thunder Voice Eagle’s Thunder Voice Hat Co., whose designs express through sustainable reclaimed garments and ceremonial materials the persistence of memory and the potential for the sacred to exist at large and small scales. The entire production makes clear that Kaino and his team have spent serious years studying magic shows and immersive theater; in fact,, Vance Garrett (Sleep No More) serves as executive producer and it’s all been organized in collaboration with Superblue’s senior curator Kathleen Forde — herself no stranger to big-ticket big ideas. And in a twist, the presenting sponsor is Mastercard, whose capitalist pursuits might be contributing to the problem, but whose stated commitment to restore 100 million trees globally by 2025 through the Priceless Planet Coalition, here results in Conservation International planting a tree for every ticket sold to the show. As in, if you can’t plant a tree 20 years ago, then please, at least plant one now.

TRIAL FOR MURDER OF NIPSEY HUSSLE SET TO BEGIN JUNE 2

FANTASTIC BEASTS: THE SECRETS OF DUMBLEDORE— MORE MESS THAN MAGIC