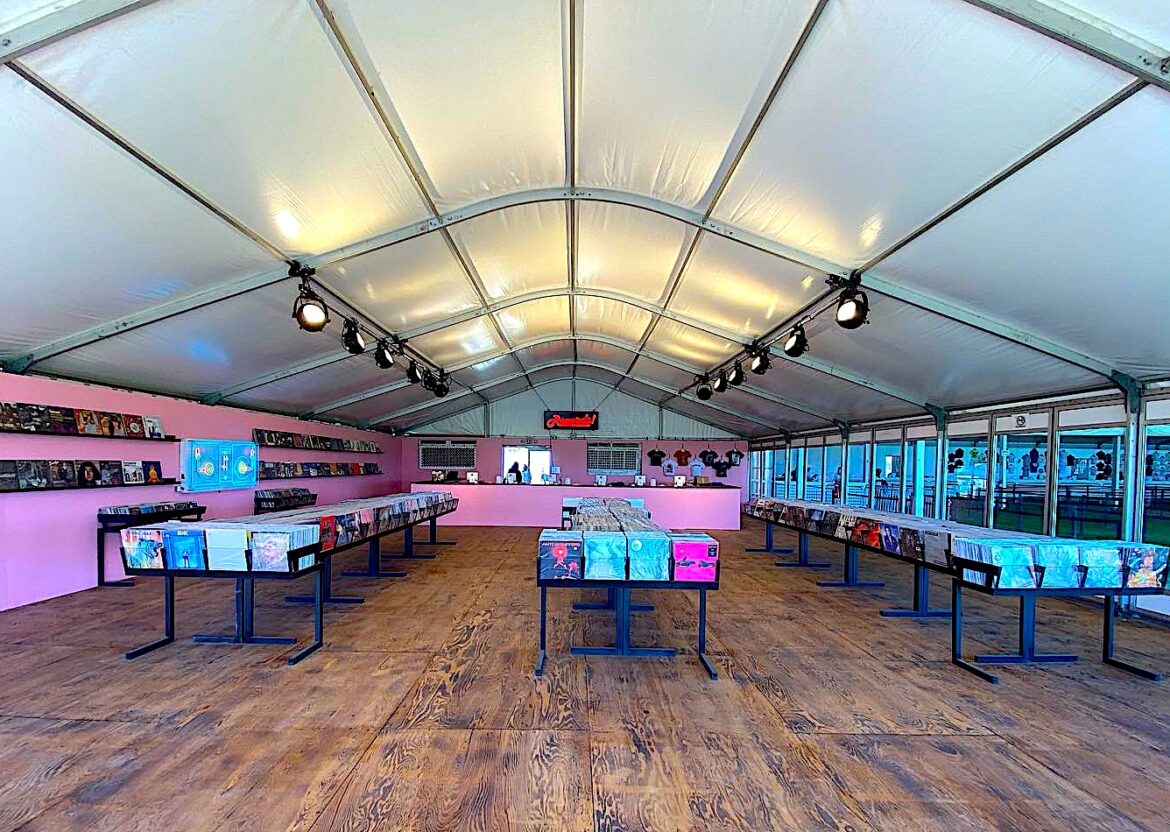 Update 5/12: Record Safari will also be at this weekend’s Cruel World festival with Bauhaus, Devo, Christian Death and more.

Vinyl records are not going anywhere, and it is quite possible that COVID-19 helped solidify their staying power forever. That’s what Alex Rodriguez, DJ booker at the Los Feliz hotspot called Pinky’s and co-owner of Record Safari in Los Feliz, thinks anyway; and he should know. The L.A.-born and Bakersfield-bred music obsessive, who also happens to be head curator for Coachella’s huge on-site vinyl record emporium, has worked in music most of his life, from DJing in both parts of California, to running vintage boutiques in Bakersfield, to managing venues, including the Glasshouse’s record store in Pomona. While the pandemic proved difficult for retail spaces, especially small businesses, he says the record trade wasn’t one of them.

“During the lockdown I think people were looking for things to do in their home, and since bars, restaurants, music events, sporting events, all that stuff was closed, the only thing that was actually open was retail,” he says. “And I mean, how many times can you go to Target? You’ll get bored and it’s all the same stuff. But the places like record stores, and like anything collectible, every time you go, there’s always different things to look at. So I think that kind of made collectibles in general, whether it’s comics or toys or records or antiques– it gave people something to do. They could go to these types of stores and see different stuff every time and buy different stuff. Then once they were home with whatever they bought, they could play with it or listen to it. It gave them something to do.”

“I thought it was gonna die once everything opened back up,” he continues. “I thought that the crazy sales and the resurgence was gonna take a huge drop once people could travel again and go out to eat and go to bars and see concerts again. But it hasn’t. I think a lot of people kind of got addicted to buying records. It’s definitely an addiction… collecting anything is.” Rodriguez, who was born in the San Fernando Valley, is lucky enough to be able to feed his own addiction and help others satisfy theirs via the new-ish Atwater record store (which opened in July of 2021 and counts Goldenvoice’s Paul Tollett as a proprietor) and the Coachella retail project too, both of which allow him to travel across the country in search of rare vinyl. There was even a documentary, also called Record Safari, made about his travels and curation.

Despite being immersed in record crate digs on the daily, Rodriguez’s music nerdom didn’t start out with a turntable. He cites MTV as his initial inspiration, particularly the artists who played metal and hard rock, and he recalls, as a lot of us do, creating mix tapes of songs off the radio via an old boombox. For older DJs, this was a way to learn about putting together playlists and creating a mood and flow via track selection. For Rodriguez the genres were all over the place and his tastes have remained eclectic.

He started deejaying in 1999 in L.A. and in Bakersfield and moved here full time in 2013. Playing music for others in public spaces, as this writer has attempted on a few occasions, is an expressive endeavor. It’s about reading a room and connecting, reflecting the energy and then taking it somewhere new. Rodriguez won fans around town for doing just that.  But even before the pandemic he decided to slow down. “There’s so many new DJs now, it’s like let the kids have that night, not some guy who’s been deejaying for 20 years in L.A.,” he says about booking others.

After spinning at Peanutbutter Wolf’s Gold Line in Highland Park, a bartender from there who also worked at Pinky’s recommended him for the job of filling turntable slots. Pinky’s opened in the Fall of 2019 and was forced to close due to COVID at the height of hipster hotness, reopening in Fall of 2021, almost two years later. It’s picked up right where it left off, and currently, it’s packed nightly with sprightly scenesters and notable names behind the decks including Johnny Jewel & Desire (of Italians Do it Better), Alex Nicolaou of Drab Majesty, and Rose Knows. The sounds are complemented by a new bar program via beverage director Aly Iwamoto, an L.A. native whose worked at The Varnish, Bavel, Death & Co, and Thunderbolt. “The DJs are all able to do whatever they want,” Rodriguez says of Pinky’s sound selectors. “Most of the genres that get played in the room are funk, soul, disco, little bit of New Wave or house, some electronic stuff, and  some hip hop. We don’t really do too much rock because it doesn’t really fit the vibe, more dance-y kind of stuff does.

There’s no designated dance floor at Pinky’s but when we attended just before the pandemic hit, revered mixmaster Cut Chemist made an appearance on the decks and people were definitely moving and grooving.  There’s a patio courtyard just outside of the bar (across from the Atrium restaurant, which shares the same owners) and music gets played outside, where crowds cluster on warmer evenings. While Pinky’s used to be vinyl-only, Rodriguez says he’s expanded to all formats since the pandemic, opening up the sonic scope of the space.

As for what to expect on any given night, Rodriguez says vibe is constantly changing. “I try to bring in different DJs to keep it fresh and I try to make sure it’s always different. So, you know, if you show up on a Thursday, three weeks in a row, you’ll hear different music.” Speaking of diversity, he takes the same approach to stocking Coachella’s record store, featuring artists playing at the fest, natch, but also new and old, popular and obscure, used and new records from all genres. He became involved with the Indio festival after doing it with Glasshouse, and later became a permanent part of the fest’s team.  With the second weekend falling on Record Store Day, hiring Rodriguez proved easier than trying to work with individual record stores like Amoeba, which have their hands full with collectors on weekends like this one.

For Record Store Day (April 23) Rodriguez says he ordered “one to three copies of everything” for both Coachella and his own store.  But “just because you order, doesn’t guarantee that you’ll get everything,” and as anyone whose tried to get a limited release during the annual collector “holiday” knows, scoring some of the hot drops isn’t easy. He’s been stocking the polo field store since 2014 and he says sales are steady, with hip-hop and pop artists most popular in recent years, a fact that definitely reflects the festival’s pivot to Gen-Z pop music bookings.

Older festival-goers might begrudge this musical shift, but the record store is encouraging young attendees to discover vinyl, at least. The store makes it easy to do so too,  offering a coat check like system in which customers pay eight bucks (which also gets ‘em a Coachella tote) and a hold of purchases until the end of the fest. Price points run from $2- “several hundred” for highly collectable titles.

“I’ve been buying records since 1994 and I’ve definitely seen their popularity go up and down many times,” says Rodriguez, who deserves credit for his contribution to keeping them cool, via everythig he does, including sharing great album jackets and rare finds on Instagram. “So far, this is probably the longest stretch, and it just keeps climbing.”