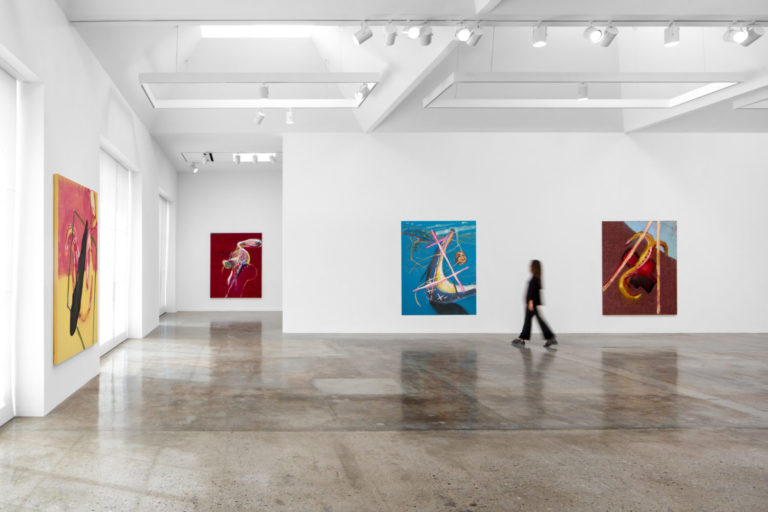 When someone says “Julian Schnabel” in certain circles, his name invokes those infamous smashed ceramics paintings that literally broke the concept of surface into smithereens, turning late-stage East Coast Abstract Expressionism into a spectacle of ambition, rebellion, and theatricality caught in a Newtonian struggle with gravity and alchemy. His subsequent decades of constant practice explored the abject and mythological in a range of uber-confident and sometimes polarizing but always relevant aesthetic gestures. But in other circles — especially L.A. aka Hollywood — Julian Schnabel is foremost the visionary filmmaker behind cinematic masterpieces like Basquiat and The Diving-Bell and the Butterfly and one hell of a van Gogh bifocal biopic.

His feature films are full of poetry and dreams, love, and redemption in a way that his paintings are usually not; as a painter, he rather explores darker, sometimes even fearful places, the edges of madness even, and the corrosive effects of an uncomprehending world. (Despite the films’ hypnotic lyricism, this is also part of what drew him to explore van Gogh’s story, as well as his friend Basquiat’s, and Bauby’s.) But in his current exhibition of prismatic 2022 mixed media works on velvet inaugurating the high-profile Pace Gallery’s Los Angeles location, Schnabel serves two things that are somewhat rare in his actual paintings — beauty and an abundance of joy. The title of the show comes from J.D. Salinger’s short story “For Esmé – with Love and Squalor,” a tale about war and grace in a correspondence between a wise young woman and a World War II soldier with PTSD (post-traumatic stress disorder), for which Schnabel also named his newborn daughter. Though the paintings are abstract despite the occasional figure or snippet of landscape threatening to resolve itself more completely, as a body of work they are very much tied to a narrative, at least an emotional one. “She wrote to him fairly regularly,” goes the story, “from a paradise of triple exclamation points and inaccurate observations.”

With their rather breathtaking palette of jewel tones, softly radiant velvet grounds, energetic gestures, and kaleidoscopically saturated impasto pigments, the exuberant dreaminess of this work seems to share more with the spirit of his films than with the preponderance of his previous paintings. L.A. Weekly sat down with Schnabel at the gallery as the show was getting underway in April to figure some of this out. L.A. WEEKLY: Your paintings are abstract, and your movies are, if not entirely linear, certainly narrative, and telling real people’s stories. How do you organize your ideas for working in both of those ways? Do you find them to be connected or do you keep them separate?

JULIAN SCHNABEL: Well, I would have said that they were totally separate some years back because I guess part of my brain is a storyteller and the other part doesn’t care if there’s a story. Someone once wrote that I see paintings everywhere and I do, but I also have other sensations or feelings about things. And I have been moved by films, and you know I think that film and painting kind of take me out of the ordinariness of my own life, to where I could inhabit those worlds. I saw the Red Sea part in The Ten Commandments when I was little, and I saw that quite a few times. But I also, I mean I grew up basically in Brooklyn in a wasteland of zero culture. My parents were very nice, but they didn’t know anything about art, we didn’t have any art in our house — but we went to the movies. Much later I realized that there was a different kind of movie people could make. LAW: Thinking about the way that you put abstraction into the films, from the surfing in the sky in Basquiat, to the split focus in the van Gogh film that gave form to his debilitation, it’s at those moments I remember you as the painter along with as the director. Am I overthinking it?

JS: I’m always using different materials (in the studio) and when I’m filmmaking, I’m using those materials in the same way — using the camera. It’s like, you’re looking at the wind, and you’re thinking about a way to tell the story that will enrich it, looking for energy by not rehearsing and letting somebody do it on the first shot. And when you’re painting — if you look at these paintings there’s a kind of spontaneity about what’s happening. There’s a mark, and then you either leave it or you destroy it. But you know, it’s like Thelonious Monk said, there are no wrong notes, and I’m having a pretty damned good time working.

For Esmé – with Love and Squalor is on view at Pace Los Angeles, 1201 S. La Brea; through May 21; pacegallery.com.