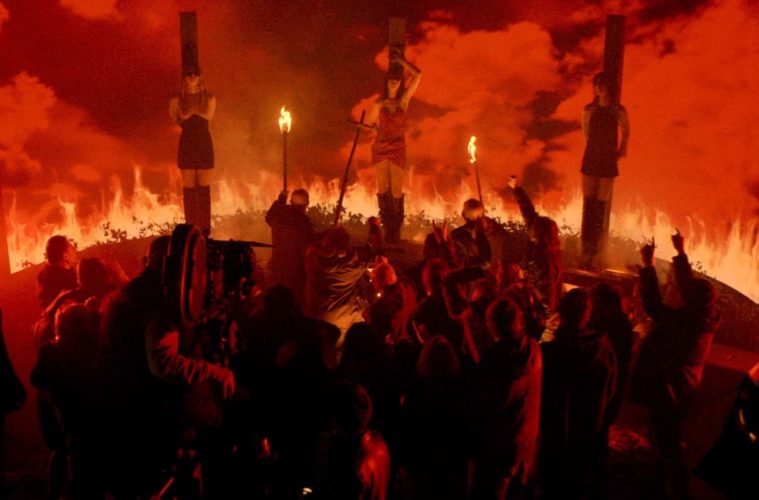 Movies about filmmaking seem to have a built-in spiritual dimension, as if the instinct to create art is in fact a quest comparable to Galahad’s search for the sacred grail. So it is with Gaspar Noé’s Lux Æterna, a 51-minute feature about a French film shoot that goes horribly—albeit photogenically—awry. The film was funded by Yves Saint Laurent and premiered at Cannes in 2019 as part of their midnight program. After a long delay due to the pandemic, it will receive a national rollout this month starting in New York and Los Angeles.

Charlotte Gainsbourg and Beatrice Dalle play versions of themselves—the former an actress, the latter an actress turned director—and Noé devotes a good portion of the scant runtime to the opening scene in which the two women swap war stories about previous productions. Bonding over their shared sense of persecution as females in the film industry, they conclude that when it comes to art, “the ends justify the means.” This leisurely conversation turns out to be good prep for both of them, as we soon learn that Charlotte is playing a witch condemned to burn at the stake while Beatrice is set to suffer a metaphoric “crucifixion” at the hands of a vindictive producer. Other members of the cast include Abbey Lee and Clara Deshayes, each playing themselves playing witches.

As the crew prepares for rehearsal, tensions escalate. We learn that one of the producers is looking for an excuse to fire Beatrice and hires a cameraman to watch her every move. A douchey young filmmaker from L.A. (Karl Glusman) tries to recruit Charlotte for his next film while an entertainment journalist pokes around in vain for a scoop. Just when everyone is ready to shoot, the semicircular LED video wall goes berserk and starts flashing seizure-inducing light everywhere, transforming the stage into a psychedelic night club.

On paper, the clash of egos and technical problems lend themselves to a comedy of errors such as in Tom DiCillo’s Living in Oblivion, but Noé has more pretentious goals. From the outset, he prepares his audience for a meditation on the agonies of art-making by inserting clips from Carl Theordore Dreyer’s Day of Wrath, and interspersing quotes from Dreyer, Godard, and Fassbinder about the struggle for artistic transcendence. (That he would place himself in the same company as these eminences reveals more about Noé than he probably intends for us to know.)

If all of this amounts to little more than a sketch, the parts prove to be more impressive than the sum. The effects of the stroboscopic lights are sufficiently trippy, and the split-screen approach that allows the audience to follow two separate lines of action unfolding simultaneously come across as a dry run for his other just-released Vortex, which makes meaningful use of this gimmick. In the final scene, Lux Æterna visually quotes one of the most enigmatic passages in Day of Wrath, in which a cross is capped with a triangular hood, forming an arrow that points toward heaven. Noé may not understand God, Christianity, women, or Dreyer, but he’s clearly having lots of fun playing around with the symbols.