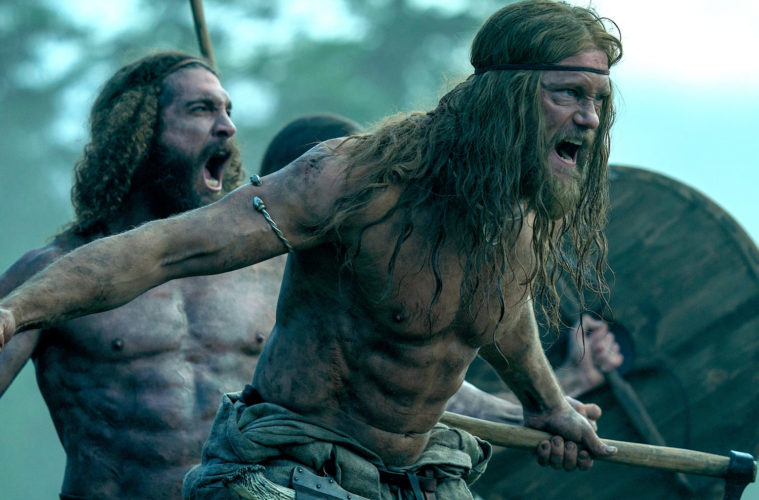 A savage and mesmerizing Viking saga like no other, Robert Eggers’ The Northman leaves your senses bludgeoned by the time the credits roll. Like The Witch and The Lighthouse, which made Eggers an indie horror darling, his latest has an obsessive intrigue with pastoral history, baroque language, and pagan mythology, albeit on a much larger scale. With a budget of nearly 90 million dollars, this visually striking odyssey is distinguished by its heavily researched set pieces, authentic costuming, dreamlike vistas, and visceral, bone-cracking battle sequences.

It’s the 9th century in Scandinavia as we’re introduced to Prince Amleth, the son of King Aurvandil (Ethan Hawke). When the battle-weary ruler returns to his dilapidated kingdom and beautiful wife, Queen Gudrun (Nicole Kidman), after years of fighting wars and scouring the countryside, he takes young Amleth to a sage (Willem Defoe) for an initiation ceremony where they ingest psychedelics, howl like dogs, and experience visions of their family tree. This is pure Robert Eggers’ territory – a dark realm where uncertainty, paranoia and magic coexist. The spell quickly ends however, when the child witnesses his uncle Fjolnir (Claes Bang) murder his father. As the boy escapes into the wilderness, he vows to avenge his father and save his mother from his uncle’s tyranny.

Several years later, a bearded and sinewy Amleth (Alexander Skarsgård) travels the Scandinavian countryside with other grunting, homicidal Vikings. These musclebound marauders invade small villages and decimate entire families before feasting on their food and wine. One night, after a particularly brutal skirmish, Amleth encounters a bejeweled Seeress (Bjork) who informs him that his uncle fled to Iceland with his mother who he recently took as his bride. With his thirst for revenge rekindled, Amleth jumps on a ship and insinuates himself with a group of slaves bound for Iceland, including the alluring Olga (Anya Taylor-Joy). From here, the movie ratchets up the tension as Amleth aims to exact his revenge on his uncle.

If the story sounds familiar (a young man avenging his father’s murder by the uncle who married his mother), you probably heard of a play called Hamlet. Inspired by the same Scandinavian folktale, you can discern the contours of that play in the film’s narrative. Eggers simply exhumed its bones and slapped some muscle on it. Instead of a brooding Danish prince who wails, “To be or not to be,” our hero is a twisted ball of hate and cunning. He’s not apprehensive about killing his uncle as much as enjoying the process of tormenting him. It’s Shakespeare on psychedelics and Swedish Death Metal.

If The Northman shares anything with other Hamlet adaptations, it’s the spiritual exploration of moral uncertainty, which questions the glory in killing another man, even if it’s justified. Co-written by Eggers and Sjon (Lamb), the film is not without a misstep or two. In constructing a world where loathing, lust and violence are a way of life, the filmmakers forgo levity and human empathy. Although we understand Amleth philosophically, we don’t feel an emotional connection to him or anyone else. A little nuance and humor would’ve gone a long way, especially since Eggers’ somber tone and often incoherent antediluvian dialogue already keeps us at a distance. But these are modest gripes for a work that achieves greatness on such an impressive canvas.

Every frame of Jarin Blaschke’s cinematography is a carefully rendered baroque painting, while the score by Robin Carolan and Sebastian Gainsborough pushes us deeper into the ether with transcendent rhythms and primordial drums. Taking cues from films like Excalibur and Conan the Barbarian, Eggers is able to weave hypnotic hallucinatory sequences into the film’s embroidery without losing sight of the central plot.

It also never hurts to have a remarkable cast. Skarsgard inhabits Amleth with such ferocity, you wonder if he had a mental breakdown on set. Bang’s murderous uncle balances repressed rage and existential confusion with an amazing fluidity, while Kidman’s Queen Gudrun absolutely slays. She’s frightening. And the always mesmerizing Taylor Joy adds a bit of romance and grace to a movie brimming with machismo.

The real star however is the movie’s ethereal and paranoid atmosphere, which Eggers crafts with a sculptor’s precision. He’s proven himself to be a genuine filmmaker. Unlike a lot of contemporary directors who edit their movies like overly eager children on a sugar high, Eggers brings a sense of patience and curiosity. With a Kurosawa-esqe flair, he uses long tracking shots and detailed production designs to pull you into the dark landscape, while maintaining an undercurrent of menace. Even if some of the thinly drawn characters get buried under a mountain of mud, bone, and gristle, The Northman is a compelling experience. It’s also one of the most brutal and astonishing films of the year.